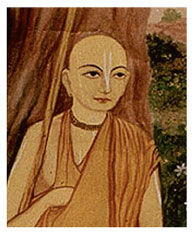 Sri Gaurcandra used to repeatedly remark that, in relishing the mellows of love in devotion, there is no one to compare with Madhavendra Puri. When the disciples of Madhavendra Puri, headed by Isvara Puri, saw their spiritual master and the Prabhu fallen in a faint of ecstatic love, they began to cry. Gradually, Nityananda Prabhu and Madhavendra got back their external consciousness. When their eyes opened and they again got sight of one another, they put their arms around each other's necks and cried tears of joy. Then they began to roll in the sandy earth carried by the waves of ecstatic love, while rending the sky with their loud roaring. As a river of love began to flow from their eyes, Mother Earth considered herself to be blessed in being flooded by that inundation. With the appearance of the transformations brought by bhava, trembling, tears, and standing of the hairs on end, it could be understood that their bodies had become a place of pastimes for Caitanya Gosai.

Madhavendra Puri continued to embrace Nityananda Prabhu tightly to his chest. He wanted to say something but his voice was choked up due to experiencing intense emotions. Isvara Puri, Brahmananda Puri and the other disciples of Sri Puripada present, became completely enamoured by Nityananda Prabhu. Some other pilgrims were present at that place but due to being devoid of devotion, they couldn't understand what was going on and continued to converse amongst themselves. The devotees felt some sorrow to see the behaviour of those dull-headed brutes so they retreated into the forest to be rid of their company. When they were alone together again, their distress was destroyed and they continued to relish the mellows of Krsna-prema. In this way Nityananda Prabhu and Madhavendra Puri spent some days together in the happiness of Krsna-katha.

Madhavendra Puri's love of God was very uncommon. Simply upon seeing a dark rain cloud he would fall down unconscious. Day and night he imbibed the spirituous liquor of Krsna-prema, and thus remained intoxicated, sometimes laughing, sometimes crying, sometimes raising a tumultuous hue and cry. Nityananda also behaved just like a madman, falling down on the ground, his body agitated by waves of ecstasy. As lava belches forth from a volcano, loud laughter erupted from his mouth while his whole body, as if in the throes of a great earthquake, trembled violently.

Never before having seen such unprecedented displays of ecstatic emotions, Madhavendra Puri's disciples continuously remained engaged in hari-kirtana. No one knew whether it was day or night. Having become completely absorbed in the mellows of Krsna-prema, the days were passing though it seemed to them that not even a moment had elapsed yet. Whatever was discussed between Madhavendra and Nityananda is known only to them and Sri Krsnacandra. Who else is capable of understanding such subject matter? Madhavendra Puri was unable to give up Nityananda's company and so he continued to roam about, keeping Nityananda with him.

Madhavendra Puri told his disciples, "Never before anywhere in all my travels to all the holy places, have I ever seen such love as this. I could understand that the Supreme Lord is merciful to me when I got a friend like Nityananda as my close companion. Whenever one gets His association, that place becomes the sum total of all holy places and non-different from Vaikuntha itself. Whoever simply hears about Him will definitely get the association of Sri Krsnacandra. And whoever bears even the slightest enmity towards Him, though he may be a devotee, is not dear to Krsna." In this way, day and night, Madhavendra praised the attractive qualities of Nityananda Prabhu.

Lord Nityananda respected Madhavendra Puri as his guru and always behaved with him in that relationship. After travelling together for some days finally Nityananda Prabhu set of in the direction of Setu Bandha while Madhavendra Puri started for Sarayu. Having lost contact with the external world neither of them was aware of his own body. In order to maintain body and soul together, they thus remained in these transcendental states of consiousness. If in external consiousness, they would cease to live. [C.B. Adi 9.158-192]

At the time of his departure from this world, Madhavendra Puri was completely absorbed in separation from Krsna and constantly repeated one sloka. This verse is considered by Gaudiya Vaisnavas to be the essence of expression of the mood of separation.

"O My Lord! O most merciful master! O master of Mathura! When shall I see You again! Because of My not seeing You, My agitated heart has become unsteady. O most beloved one, what shall I do now?
[ C.C ML 4.197 ]

"Madhavendra Puri's body is totally imbued with divine love, as are his followers as well. He takes nothing other than the juice of the mellows of love for Krsna as his foodstuffs. Thus his body has become the place of pastimes of Sri Krsna."
[C.B.Adi 9.155]

His worshippable Deity, Gopalji, is presently residing at Nathdwar in Rajasthan, and is worshipped by the followers of Vallabhacarya.
Sri Krsna Balaram Mandir - 223, Seva Kunja, Vrindavan
To Top