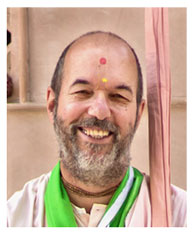 Maharaja was born as Guy Bouchié de Belle in 1953 in an ancient French, aristocratic family, with the title of Baron. From a young age he wanted to become a catholic priest, but starting the practice of yoga at 14 made him turn eastwards for his spiritual development.

He studied and practiced Buddhism, then kriya-yoga in India, before taking up the path of bhakti in 1973. He received diksa initiation in 1974 under the name Jayantakrid das from Srila A.C. Bhaktivedanta Swami Prabhupada, of whom he is one of the most senior French disciples.

In March 2008 after thirty five years of practice and study on the path of bhakti, he received from Srila Bhaktivedanta Narayana Gosvami Maharaja the renounced order of sannyasa and the name Bhaktivedanta Suddhadvaiti Swami.

Maharaja’s vast knowledge and long experience in teaching allows him to present the most esoteric subjects of the ancient wisdom of India in a way both captivating and easily understandable by his audience. His humor, friendly, empathic nature and deep knowledge of human psychology help make his presentation easy to catch.

In his past ashram, Maharaja was head of a large family and can relate to the various challenges of practicing bhakti-yoga in family life in this modern era. Practiced in communication skills and EFT (Emotional Freedom Technique), he is always available for individual counseling, workshops and seminars.

He is presently finishing his PhD thesis in philosophy.