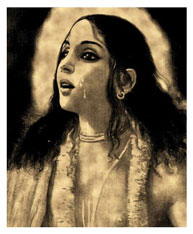 Antardvipa’s central point, the Maha-yogapitha, is the appearance-place of the Lord, and is also known as Mayapura. This Antardvipa consists of Ballala-dighi (Prithu-kunda), a portion of Vamana-pukura, Shrinathapura, Ganga-nagara and other places. Shri Jagannatha Mishra’s house was within the present Vamana-pukura. Although Shriman Mahaprabhu eternally performs pastimes here, only fortunate souls can witness them.

When the foundation to the present grand Yogapitha Temple in Mayapura was being dug, a small four-armed deity was found. This deity had been worshipped by Shri Jagannatha Mishra, whose temple was located in that spot. And just nearby, under a large neem tree, Nimai took birth from Shri Shachi-devi’s womb. Shachi-devi’s father, Shri Nilambara Cakravarti, was a renowned scholar of astrology and logic. Shachi-devi was highly chaste, devout and the embodiment of mercy. Her eight daughters died at birth, one after the other. She then gave birth to an extraordinary son named Shri Vishvarupa. He was learned in the scriptures, peaceful in nature and benevolent. He was omniscient and his intellect was unparalleled. Although he was incomparably beautiful, he was completely detached from sense enjoyment. Nimai took birth after Vishvarupa.

Nimai was none other than Vrajendra-nandana Shri Krishna Himself who had accepted the mood and lustre of Shri Radha. He chose to appear in this world for several reasons among which four are prominent:

(1) To propagate the yuga-dharma, or the religious practice for the age. This is the congregational chanting of the holy names (shri-nama-sankirtana).
(2) To distribute what had never been given before – unnatojjvala-prema, transcendental love in the elevated amorous mellow.
(3) To respond to the entreaty of Shri Advaita Acharya, who was perturbed by the extremely irreligious state of the world at that time. Shri Advaita Acharya had wor-shipped Shri Krishna with Ganga water and tulasi leaves, and thus induced the Lord to appear.
(4) To fulfil His three confidential desires. Krishna, who is supremely merciful and the enjoyer of all transcenden-tal mellows, accepted the mood and lustre of Shri Radha and appeared as Shri Gauranga:
(a) to taste the greatness of Shrimati Radhika’s prema,
(b) to personally taste, as Shrimati Radhika does, all the sweetness of His form, and
(c) to taste Shrimati Radhika’s happiness when She relishes His sweetness.

Shri Gauranga Mahaprabhu took birth on 23rd Phalguna in the Shakabda Era 1407, that is [according to the Christian Era] 28th February, 1486. It was a full-moon day, and He appeared at twilight. There was a lunar eclipse that evening, and everywhere hundreds of thousands of people were singing the glories of Hari. In such a glorious atmosphere, which was surcharged with the chanting of the holy name, He appeared from the womb of Shri Shachi-devi. Because He took birth under a neem tree He was named Nimai, and because His complexion was golden in lustre, He became known as Gauranga (golden-limbed). The ladies exclaimed, “Hari Bol, Hari Bol!” and that abode resounded continuously with the vibration of the holy names.

Nimai’s childhood nature was extremely restless, just like Shri Krishna’s. Once, in the house of Jagannatha Mishra, He caught a snake and proceeded to play with it. Another time He climbed upon the shoulders of a thief and rode on them throughout the town. On an Ekadashi day He begged for the food that was being offered to the deity in the house of a devotee. He cried often, and only stopped when someone chanted the holy names, at which He broke out into loud peals of laughter. Sometimes, on His way home from school He would play games in the Ganga with the other children. When His elder brother Vishvarupa accepted the renounced order, however, Nimai’s behaviour became more subdued and He studied at Shri Gangadasa’s school, which He attended with Gadadhara, Damodara, Jagadananda, Mukunda and other boys. Later He established a Sanskrit school in His own home where He taught grammar.

At one of the Ganga’s ghatas in Antardvipa, He crushed the pride of a champion of erudition named Keshava Kashmiri and instructed him in bhajana. In Antardvipa He was married twice; first to Shri Lakshmipriya-devi, and after she left this world, to Shri Vishnupriya-devi. It was from here that He travelled to Gaya, where Shri Ishvara Puri initiated Him into the chanting of Shri Krishna’s names. When He returned He had become transformed into an exalted devotee who constantly tasted transcendental sentiments. Finally, in a mood of detachment, He left His aged mother and His wife Vishnupriya and crossed the Ganga to accept the renounced order in Katava.

Later, in Shantipura, His mother requested Him to take up His residence in Puri-dhama instead of Vrindavana, and He agreed to do this. He later left Puri to travel throughout South India where He discussed bhakti-tattva with Shri Ramananda Raya on the bank of the river Godavari. In all, He remained based in Puri-dhama for twenty-four years, the first six of which were spent travelling to Vrindavana, South India and other places. During the remaining eighteen years He experienced an unceasing restlessness caused by feelings of separation from Krishna. Svarupa Damodara and Raya Ramananda were able to pacify Shriman Mahaprabhu’s specific moods by reciting appropriate verses from Shrimad-Bhagavatam, or by singing songs by Chandidasa, Vidyapati, or from Jayadeva Gosvami’s Gita-Govinda. He had conducted His married life as an ideal house-holder, and when He renounced it, He lived a life of complete detachment. In this way He set the example how to engage in the ideal, renounced life of bhajana.

When Shriman Mahaprabhu accepted sannyasa, the lives of Mother Shachi and Vishnupriya-devi became filled with intolerable separation from Him. At that time, they were cared for by Ishana Thakura and Shri Vamshi-vadanananda. In separation from Mahaprabhu, Vishnupriya-devi forgot to eat, drink or tend to other bodily needs. Indeed, she forgot everything, and became extremely weak and frail. She simply chanted the maha-mantra from morning to noon, and for each mantra she chanted, she put aside one grain of rice. At noon she prepared that rice and offered it to Shri Radha-Krishna and her deity of Mahaprabhu. She then offered the prasada to Shachi-devi, who would accept some and leave the rest, which amounted to a mere handful, for Vishnupriya-devi. With a restless heart she remembered Shri Chaitanya Mahaprabhu day and night, and as she chanted the holy name, she wept. Faithful devotees received darshana of her lotus feet only after repeated requests.

Unable to tolerate separation from Shriman Mahaprabhu, Vaishnavas like Shri Nityananda Prabhu, Shri Advaita Acharya and Shrivasa Pandita gradually moved away from Navadvipa to reside elsewhere. Later, when the Ganga flooded a large part of Navadvipa, the inhabitants of Navadvipa moved to the western bank, called Kuliya-Pahadapura.

Sri Caitanya pioneered a great social and spiritual movement in India over five hundred years ago, which today continues to spread its profound influence worldwide. While man in the West was exploring outward in the physical universe, in India Sri Krishna Caitanya was exploring inward, exhibiting unparalleled spiritual potency, and discovering the truths of consciousness and transcendental reality. As a young boy he overwhelmed astounded scholars, establishing his own school at the age of sixteen. Within his lifetime, Sri Caitanya transformed India in four respects: philosophically, by defeating the greatest philosophers of his day; socially, by opposing the blindly rigid caste system; politically, by organizing India's first civil disobedience movement against repression by the Mohammedan government; and spiritually, by freely distributing nonsectarian love of God. Sri Caitanya is the Golden Avatar, the incarnation of Krishna in this age. He has come to freely distribute the most elevated mood of loving devotion by chanting the Holy names of the Supreme Personality of Godhead: Sri Krsna.

Lord Caitanya Mahaprabhu instructed His disciples to write books on the science of Krsna, a task which His followers have continued to carry out down to the present day. The elaborations and expositions on the philosophy taught by Lord Caitanya are, in fact, the most voluminous, exacting, and consistent, due to the system of disciplic succession. Although Lord Caitanya was widely renowned as a scholar in His youth, He left only eight verses, called Siksastaka. These eight verses clearly reveal His mission and precepts. These supremely valuable prayers are translated herein.

Glory to the sri-krsna-sankirtana, which cleanses the heart of all the dust accumulated for years and extinguishes the fire of conditional life, of repeated birth and death. This sankirtana movement is the prime benediction for humanity at large because it spreads the rays of the benediction moon. It is the life of all transcendental knowledge. It increases the ocean of transcendental bliss, and it enables us to fully taste the nectar for which we are always anxious.

O my Lord, Your holy name alone can render all benediction to living beings, and thus You have hundreds and millions of names, like Krsna and Govinda. In these transcendental names You have invested all Your transcendental energies. There are not even hard and fast rules for chanting these names. O my Lord, out of kindness You enable us to easily approach You by Your holy names, but I am so unfortunate that I have no attraction for them.

O almighty Lord, I have no desire to accumulate wealth, nor do I desire beautiful women nor do I want any number of followers. I only want Your causeless devotional service, birth after birth.

O son of Maharaja Nanda (Krsna], I am Your eternal servitor, yet somehow or other I have fallen into the ocean of birth and death. Please pick me up from this ocean of death and place me as one of the atoms at Your lotus feet.

O my Lord, when will my eyes be decorated with tears of love flowing constantly when I chant Your holy name? When will my voice choke up, and when will the hairs of my body stand on end at the recitation of Your name?

O Govinda! Feeling Your separations I am considering a moment to be like twelve years or more. Tears are flowing from my eyes like torrents of rain, and I am feeling all vacant in the world in Your absence.

I know no one but Krsna as my Lord, and He shall remain so even if He handles me roughly by His embrace or makes me brokenhearted by not being present before me. He is completely free to do anything and everything, for He is always my worshipful Lord, unconditionally.