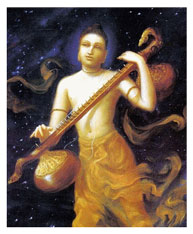 Narada is Guru. He has so many disciples-Vyasa, Valmiki, Dhruva, Prahlada, Pracinabarhi, Valakilya, and the thousands and thousands of sons of Prajapati whom he enlightened two times-all are his disciples. But why are there so many differences? Do you see any difference between Dhruva and Prahlada? Can you tell me?

Still, Dhruva was thinking, "I am the disciple of Narada." But Prahlada was rejecting all these material things. And what Prahlada wanted, he also received from Narada-the realization and vision that 'God is everywhere, and everything is in God.' He was as therefore a Maha-bhagavata. He could see his worshipable God everywhere, even in the grass. He had nothing to fear; he never feared. He was self-satisfied.

But Narada also has a disciple like Sri Veda Vyasa, and he gave him something more. What is that? Vyasa knows all worldly things. He has also realized transcendental things, and he has revealed that in his scriptures. He divided the Vedas into four, and he put the essence in Vedanta. Then he took the essence of Vedanta and put that in Srimad-Bhagavatam. For persons with not so much intelligence, for those always absorbed in sense gratification, he wrote Mahabharata. This scripture is very interesting because it is full with ksatriyas fighting each other. Vyasa was very intelligent. He knew how to take his readers to the transcendental realm. However, although he had written everything very cleverly, he still was not satisfied. He therefore approached Narada and said, "Oh, even though I've written so much, I'm not satisfied. Why?"

Sri Vyasadeva then took shelter of bhakti, he personally saw the Supreme Godhead and maya as His shadow, and then he wrote Srimad-Bhagavatam. What is contained in Srimad Bhagavatam? The highest transcendental knowledge, love and affection, and the constitutional form of Krishna who is the embodiment of love-raso vai sah. In Srimad Bhagavatam Vyasadeva glorified the gopis
vande nanda-vraja-strinam
pada-renum abhiksnasah
yasam hari-kathodgitam
punati bhuvana-trayam
(SB 10.47.63)

["I repeatedly offer my respects to the dust from the feet of the women of Nanda Maharaja's cowherd village. When these gopis loudly chant the glories of Sri Krishna, the vibration purifies the three worlds." (BBT)]

Though Narada explained transcendental knowledge to Prahlada, can Prahlada be like Vyasa or Sukadeva Gosvami? Never. Why are these differences seen? Why? You see that Narada also gave knowledge to Pracinabarhi, but he was not so advanced.

You can see that Madhavendra Puri had so many disciples, and especially 9 or 10 sannyasis were of a very high class. However, each of his disciples was of a different category. For example, Ramacandra Puri also took initiation from Madhavendra Puripada, but he was a mayavadi. And another disciple, Sri Isvara Puripada, was a high class of realized soul and devotee. He was always weeping like Madhavendra Puri, and he became the Guru of Sri Caitanya Mahaprabhu.

Paramananda Puri and Brahmananda Bharati were also his disciples. There were so many disciples of Srila Madhavendra Puri, but they were of different types. Similarly, Srila Swami Maharaja, your Prabhupada, came to this world. I think he has many lakhs of disciples-direct disciples, indirect disciples, 'by phone' disciples, by letter, by his cassettes, and nowadays also by e-mail. By so many ways they are taking shelter of him, and they are all telling that, "I am his disciple, his highest disciple."

Why are there differences?

Another example is that of the Sun. The Sun is the same when reflected in glass and in water. You will see that air and water become hot by the sunrays, but wood never becomes so. Why? A magnifying glass preserves the heat of the sun to such an extent that it can burn you by its touch. By preserving the heat, it can also create fire. Although this quality is not in wood, if there is more heat, that heat will also automatically enter the wood. There may even be a forest fire, at which time all wood will burn. Is there some change in the sun? Is there a dosa, defect in the sun? Or is the defect in those who receive it?

Devotee: In those who receive. The Sun is the same, but it is the reception.

Srila Narayana Maharaja: Similarly, Guru is the same. Why, then, does he give so many various kinds of knowledge to so many disciples? And they each say that, "I am the disciple." of Srila Svami Maharaja, of Narada, of the Sun, or of Krishna. Why are there so many differences?

If the hearts of two disciples are pure, and they go to one Guru, can they receive the same thing or not?

Devotee: It depends on speciality then of their soul.

Srila Narayana Maharaja: Yes. But the Guru wants that all should follow him, and he wants that they should be as he is. I'm not talking about bogus gurus. They cannot give you anything because they are bogus. They can only give bogus things. They can never give real things. As a mundane analogy, if anyone wants heat and light, he should serve the Sun. Similarly, if anyone wants a high class of knowledge, tattva-jnana, he should go to a realized soul, to a real, bona fide guru. One may think, "My guru is so high class. In this world there is no one like my guru." But that guru may actually be bogus, having no transcendental idea. He's never touched that realm. One may be thinking, "My gurudeva is now the supreme guru of gurus in the whole world. There's no one else like him." Will he gain anything by such thinking? Nothing.
Sri Krsna Balaram Mandir - 223, Seva Kunja, Vrindavan
To Top