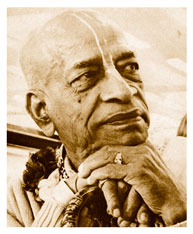 I have known him personally since 1946, and I never saw him like that. I know personally that he has not only come only to give vaidhi-bhakti. He has come to preach rupanuga-bhakti.

One special quality I saw in him was that he was very simple, and always smiling. Before him, other preachers from India had gone to Western countries. They were very intelligent and knew all philosophical truths, but they were not so simple that they could mingle with everyone, including children. I have seen Srila Swami Maharaja; he used to play with little children and he was so funny. He had no false ego.

He always used simple words, and his method of giving Krsna consciousness was like that of Sri Caitanya Mahaprabhu. When Mahaprabhu was traveling to Vrndavana He chanted "Hare Krsna, Hare Krsna." Or, He chanted:

He continually wept, and it appeared as though the Ganges and Yamuna Rivers were flowing from His eyes. He was not thinking about where He was going. He was simply weeping and calling out, "Krsna Krsna, Krsna Krsna." And, by His influence, all the elephants, tigers, lions and bears of the forest also began to chant "Hare Krsna." Where was their philosophy? They were without philosophy.
So Srila Swami Maharaja went to the West and began to chant:

At first he did not try to explain many deep philosophical topics. He spoke very simply and told his audiences, "Chant Lord Krsna's name." From there he began. He used to love everyone, whether they were qualified or not; and those who met him became his.

When I went to the Western countries I followed in his footsteps. I did not discuss very complex Vedanta philosophy. I only gave simple Harikatha, and by his mercy and the mercy of my Gurudeva, so many were charmed.

Previous to his coming to the West, big scholars of the Gaudiya mission went to England and America; but practically speaking they were not able to make any disciples. On the other hand, we see that by his simplicity, by his very simple philosophical presentations, by preaching the holy name and loving all, he was so successful. Of course, the deepest philosophy was in that. Love is the deepest, most supreme philosophy.

Those who follow strongly the life and teachings of their Gurudeva, from their heart, are really disciples. Those who have taken initiation from Parama-pujyapada Srila Svami Maharaja but are not following his teachings, are not truly disciples. Those who are not following or practicing may have been outwardly initiated by him, but they are not real disciples. On the other hand, those who have not taken  initiation from him but are totally following – they deserve the qualities to be true devotees.

Try to follow the teachings and actions of Srila Svami Maharaja – not following blindly and not imitating. Simply copying will not do. We should try to deeply follow his siddhanta, behavior and moods.

A disciple cannot fall down. If one falls down, he was not a real disciple and he has not actually taken initiation. Initiation is a matter of heart and mood. It is not simply the whispering of a mantra into an ear.

I was so happy to hear the moods of his disciples in their glorifications, and I saw that even those who have not received formal initiation from him have so much honor for him.
Today in Varsana, we are successful in observing the disappearance day of Parama-pujyapada Srila Svami Maharaja. I pray to him to give his mercy. I pray that he will shower his mercy to all bona fide followers, so that they can serve Sri Sri Radha-Krsna and Sri Sri Gaura-Nityanada Prabhu.

I know I cannot be compared to Srila Svami Maharaja’s lotus feet dust. My Guru Maharaja can be compared with him, but I have no qualities that can be compared with his. I honor him as my siska-guru. Diksa-guru and siksa-guru are the same. I am so fortunate that my diksa-guru and siksa-guru are bona fide, and you are also fortunate to have Srila Svami Maharaja as your guru. If you are not directly initiated by him, but you are initiated by one of his bona fide disciples, then you are in his line and are so fortunate.