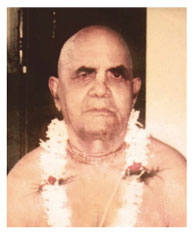 Śrīla Bhakti Jīvana Janārdana Gosvāmī Mahārāja left home at the age of seven. His background remains mysterious. No one knows exactly the village where he took birth in the state of Orissa. During his life, he never revealed his parents' names.

From a young age, he received much affection from his spiritual master, Jagad Guru Śrīla Bhaktisiddhānta Sarasvatī, who named him Ananta Ram Brahmacari. He also had a very affectionate relationship with nitya-līlā-praviṣṭa Śrīla Bhakti Prajñāna Keśava Gosvāmī Mahārāja, and upon his disappearance, Śrīla Bhakti Jīvana Janārdana Gosvāmī Mahārāja acted as the śikṣā-guru for the Gaudīya Vedānta Samiti, providing it with his affectionate guidance until he disappeared from this world in 1994.

He is considered a most elevated devotee who had boundless affection for Śrīmati Rādhikā and was famous for his great scholarship. Additionally, he established a Gaudīya Math in Kharagpur.