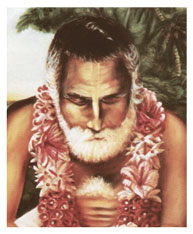 The Disappearance Day of Shrila Gaura-kishora dasa Babaji Maharaja
(from the book Shri Prabandhavali by Shri Shrimad Bhaktivedanta Narayana Gosvami Maharaja)
We cannot touch Shrila Gaura-kishora dasa Babaji Maharaja’s renounced lifestyle and high standard of bhajana, but we can at least accept and follow whatever lower principles that he established for us and practised in his own life. After making sufficient spiritual progress, we may be able to accept the higher things, but we should not desire to follow them in our present condition. Who can possibly follow his extreme renunciation, such as eating the clay of the Yamuna and Radha-kunda and remaining completely dependent on Bhagavan? He felt that if he lived in a mandira many people would come and disrupt his bhajana, so instead he lived in a latrine. People would come seeking his blessings for the purpose of attaining some material benefit, but he considered the stench of the latrine to be preferable to the stench of those people’s words. For us this is impossible, even for one minute. Therefore a kanishtha-adhikari will not easily be able to understand the life of this great uttama-bhagavata Vaishnava. The higher things have been prohibited for us, but we should accept from his life whatever will be favourable for progress in the madhyama-adhikari stage.

As long as we have not attained the mercy of Shri Caitanya Mahaprabhu, Nityananda Prabhu and Navadvipa-dhama, we will not be able to enter into Vraja. Therefore most of our previous acaryas who were performing bhajana in Vrindavana left there and went to Navadvipa to attain prema. Only after submerging themselves in the Ganga of Mahaprabhu’s prema in Navadvipa did they return to Vrindavana to drown in the ocean of krishna-prema. First they performed the bhajana of Gauracandra, and from that what did they attain? The prema of the amorous pastimes of Shri Radha and Krishna. Therefore, in the beginning Gaura-kishora dasa Babaji Maharaja performed bhajana in Vrindavana at Surya-kunda, Radha-kunda, Nandagrama, Varshana and many other places; but in his heart came the feeling that, “The type of prema that I desire is not being attained here.” He was performing kirtana with great prema, calling out “Radha, Radha! Where have You gone? Protect my life because I will die without You! Radha, Radha!” Although he cried out with extreme vipralambha-bhava, he felt that his yearning was not being fully satisfied, so he left Vrindavana and went to Navadvipa. There, to avoid having to come in contact with worldly people, he lived in a latrine. He was such a mahatma that he didn’t even construct himself a hut.
Once, the aristocratic landholder of Kasima Bazar was organising a conference of all the prominent Vaishnavas, and he approached Babaji Maharaja to request him to preside over this conference. He said, “Babaji Maharaja, I am organising a conference of Vaishnavas, and everyone desires that you be the president of this assembly. Being merciful, please give sukriti to us by accepting this entreaty, and I will take you there and bring you back in my own car.”

Babaji Maharaja asked him, “For what purpose are you organising this conference? What is the necessity of doing it?”

The man replied, “It is for the preaching of vaishnava-dharma, so people will hear talks describing Bhagavan and be inspired to take up bhajana.”

Then Babaji Maharaja said, “Alright, then you do one thing: first you do bhajana and forget about others. Leave your home, wife and children, and come to me. I will furnish you with a pair of kaupinas and then you do bhajana. First make your own life meaningful, and then worry about others. Otherwise your conference will only be for your own self-aggrandisement, and there will be no benefit in it for others anyway. First you should come to me and do bhajana for some time; then you should organise your conference.” Hearing this strong answer from Babaji Maharaja, the man was rendered speechless and went away.

Another time, one man went to Babaji Maharaja and said, “Babaji Maharaja, please be merciful to me! Please be merciful to me!” Again and again he said it. Babaji Maharaja became a little annoyed and said, “You want mercy? Then here – take mercy!” and he handed the man a pair of kaupinas. What is the purport of giving the man a pair of kaupinas? When a guru gives sannyasa to someone, what does he give him? A pair of kaupinas and the mantra. Then that person will at once become renounced, leave all worldly attachments and fully apply his body, mind and words to the service of Krishna. If the guru gives this to someone, what greater mercy could there be? “Here – take mercy!” Hearing this from Babaji Maharaja, that man became frightened, ran away and never returned.

On another occasion a young boy from a wealthy family ran away from home and came to Babaji Maharaja. He said to Babaji Maharaja, “I want to stay with you and just do bhajana.” Babaji Maharaja did not reply, so the boy began staying with him. He would bring water for Babaji Maharaja and do other services for him also, and he began telling the people, “I am a disciple of Babaji Maharaja.” But in reality Babaji Maharaja had no disciples other than Prabhupada. This boy stayed with Babaji Maharaja for some time but didn’t attain what he expected, so he thought, “I should return to material life.” Many people go to live in a matha, stay for one or two months, and then return to material life, get married and become busy in household duties. Some men leave renounced life even after ten or twenty years, but only because they desired to attain the same things as worldly people: kanaka (wealth), kamini (women) and pratishtha (prestige). They apparently leave their homes to engage in bhajana, but they are really only interested in material gain. Feeling that he had attained nothing by staying with Babaji Maharaja, the boy left and after about two weeks returned to Babaji Maharaja with a beautiful young girl from a wealthy family whom he had married. He offered pranama to Babaji Maharaja and said, “Babaji Maharaja, I have entered the samsara, the material world. Bhaktivinoda Thakura has written in his Gitavali: ‘krishnera samsara kara chadi’ anacara – we should give up our offences and perform bhajana as family men.’ Therefore I have collected a krishna-dasi. Please be merciful to her and to me also so we can engage in bhajana and have a successful material life as well.”

Babaji Maharaja replied, “You have done so well! I am so pleased! You have collected one krishna-dasi? Then you should do one thing: you should offer puja to this krishna-dasi. Every day you should cook an offering for her and offer her pranama and some flowers saying, ‘You are a krishna-dasi and very dear to Shri Krishna.’ But beware: don’t try to enjoy her, otherwise everything will be destroyed for you and you will descend into hell! Beware – don’t try to enjoy her!”
Hearing this, the boy was astonished and was rendered speechless. Frightened, he called his “krishna-dasi” and quickly left. Was deceiving Babaji Maharaja an easy thing? It was not possible to deceive him.

Babaji Maharaja vowed that he would never accept any disciples, but it was Prabhupada’s resolution that, “If I accept a guru, it will be him only.” Prabhupada wrote in his Gaudiya Patrika, “At that time I was very proud. I was thinking that there was no scholar equal to me, that there was no tattva-jnani equal to me, no speaker equal to me and no philosopher equal to me. This paramahamsa Vaishnava, Gaura-kishora dasa Babaji Maharaja, understood this; so he ignored my requests for initiation. Three or four times he told me that he would not accept disciples. He said, ‘What? You are the son of Bhaktivinoda Thakura! You took birth in such a high family that you are worshipful to me! You are such a big scholar, your appearance is so beautiful and you possess all good qualities; so what is the necessity of you becoming my disciple?’ In this way he pulverised my pride. People said that he was illiterate, but he possessed all real knowledge and was a jagad-guru.”

Babaji Maharaja replied, “These days there are so many babajis, and many of them are such hooligans that if one even mentions their names it will be sinful. They are engaged in such misconduct that a grihastha is thousands of times superior to them. In the name of parakiya-bhajana they engage in mundane activities and they will all go to hell for it. When a babaji obtains some rasagullas or any good quality foodstuff, he should just offer it to a cow. Babajis should not go to any festival, but people invite them and off they go to these festivals simply to enjoy a good meal. Feeding the dogs of the dhama is more beneficial than feeding them. Therefore I think that I shouldn’t remain a babaji. I will wear the cloth of a grihastha, and then people will not look upon me as one of these babajis.”

Bhaktivinoda Thakura said, “You have spoken correctly.” At that time the misconduct of these babajis was so widespread that people hated to even hear the good Vaishnava name, so there was a necessity for a great personality who could preach the pure prema-dharma of Shri Caitanya Mahaprabhu in the world. Then came such a great personality, Shrila Bhaktisiddhanta Sarasvati Prabhupada. He preached sankirtana in such a way that in no time the world opinion had changed, and scholars, gentlemen and everyone began to accept vaishnava-dharma. If there had been no Gaura-kishora dasa Babaji, then there would have been no Prabhupada. And if there had been no Prabhupada, then the pure prema of Mahaprabhu would not be preached all around the world as it is now. Therefore the original great personality was our father’s father’s father, our great grandfather, Gaura-kishora dasa Babaji. Today with great pride we declare that he was the guru of our parama-guru, and it is our supreme good fortune that he came to this world.

According to our qualification we will follow the instructions for bhajana and renunciation that he gave, and those who sincerely follow them will be offering the real pushpanjali to his feet. Otherwise, if we don’t offer this real pushpanjali, then we will be just like those people that he sent away. We should not desire to have material pleasures and at the same time beg for mercy as they did. For really achieving his mercy, we should offer this genuine pushpanjali to his feet, follow his instructions in a pure manner, and then we may be able to enter into real bhajana. He is never far away from us; he is with us at all times, and he will certainly bestow his plentiful mercy upon us. Calling out his name, our guruji would cry and say, “He took all of my hardships away.” Similarly he will remove all of our hardships so we will be able to perform bhajana, and to really engage in bhajana there must be no other desire whatsoever in our hearts. But if we leave sadhu-sanga, all will be lost. Therefore, remaining in the association of devotees we will perform bhajana and always remember the ideal that Gaura-kishora dasa Babaji Maharaja showed in his life. Then our lives will be meaningful, and from our bhajana we will get the real benefit. So today we offer a prayer to his feet that he will always be merciful to all of us.
Sri Krsna Balaram Mandir - 223, Seva Kunja, Vrindavan
To Top