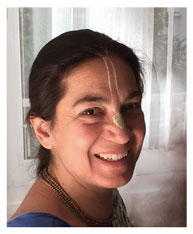 I was born in Ankara, Turkey. From the age of fourteen I practicing Hatha Yoga from a book that my mother acquired in US during a medical visit. Later I started practicing Raga Yoga when I reached my eighteenth year. At the age of twenty-one, I was initiated into Transcendental Meditation. I finished Law School in Ankara 1988. In 1990, I traveled to the US where I became a student at Maharishi International University in Iowa. I stayed in the US fourteen years and learned many spiritual practices.

My spiritual search started to bear fruit when I met the Krishna devotees. I met my Gurudeva, Srila Bhaktivedanta Narayana Gosvami Maharaja, in Los Angeles during his US travels in 2003. In 2004 I moved to Vrindavan India and began residing in the ashram there.

• The ancient Vedic mantras (chanting the same mantras from thousands of years ago passed down through the lineage of the spiritual masters)
• Kirtan (sacred Indian devotional songs- songs beyond this world that give spiritual inspiration)
• Mystical topics of India’s spiritual philosophy and culture
• Bhakti-yoga (the yoga of the self, self-realization and God consciousness)
• The law of karma, reincarnation and the process to find true, everlasting happiness
• Discussion of ancient Indian scriptures such as Bhagavad-gita and Srimad-Bhagavatam