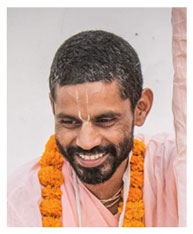 Being fully detached from material life and naturally attracted to the scriptures, by the mercy of his Gurudevas, he quickly learned all the shastras with deep realization.
He gave his first Bhagavat Saptaha before the age of 13 and for three consecutive years, 1996, 1997, and 1998,  he was awarded first place as "Best Srimad Bhagavatam Rasa Siddhanta Speaker" among all the scholars and bhaktas of Vrindavan, (from among of 50 participants) by scholars representing all four sampradayas.

He gives regular discourses on the Srimad Bhagavatam and all Gaudiya Vaisnava philosophy in Vrindavan in both Hindi and English, his speciality being his one-pointedness to our Rupanuga Guru Parampara. His resting place is in Vrindavan at the lotus feet of Gurudeva and Srimati Radhika.